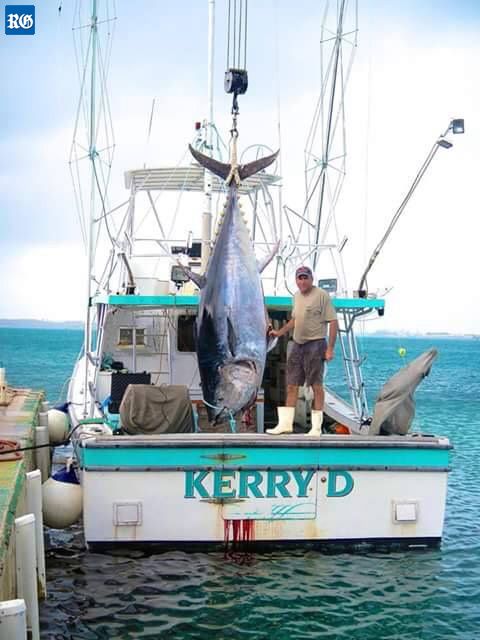 Third generation fisherman David Soares landed the biggest tuna caught in Bermuda’s waters on Saturday morning 14 January 2017)  and he did so single-handedly in 15 minutes flat.

The Bermudian, who said he has had it confirmed by the fisheries department that the 1004lb giant bluefin tuna that landed on his boat was the heaviest recorded in the island’s history, was also responsible for the previous record catch — a 1003lb tuna landed in the same fishing grounds in 2013.

He was out fishing alone on Challenger Banks about ten miles southwest of the island on Saturday morning when he felt the tug. It was his first “bite” of the day after just five minutes with the lines out.

He knew he had hold of a large fish right away as its jaws had locked on to two of his five trawling lines. The monster catch was fairly easy to pull up, he said, due to the fact it was attached to two lines.

Mr Soares, a full-time commercial fisherman, told The Royal Gazette: “I was just out trawling for the day — that is how I make my livelihood.

“I was out fishing for wahoo and tuna and I happened to catch the tuna. He bit two lines so two rods were going off at the same time. I had to wind both of the lines back in together. I was by myself but with it being on two rods, it kind of made it easy. It only took about 15 minutes to catch it.”

Once he got the fish to the surface, he had to get it on to his 45-foot commercial fishing boat Kerry D, which he named after his wife. The fish itself was almost ten feet long and needed to be put on ice and returned to shore.

Mr Soares recalled: “It wasn’t thrashing around at all he just came up pretty docile so I harpooned him and then tied some ropes to him and winched him into the boat. As far as my recollection goes, there have been 12 bluefin tunas caught in the history of Bermuda and I have caught seven of the 12 that I know of.”

Asked whether he would share his secret to success, Mr Soares laughed and said: “No.”

He added: “I just fish for them and I fish big rods. They are my passion. It is my goal in life to catch them.

“Lots of friends and family overseas have commented on the pictures; it has been seen around the world. I’m a third generation fisherman — my grandfather fished here, my father fished, it is kind of a family tradition.”

Asked if he may have picked up the knack from his forefathers, he replied: “Sometimes you would rather be lucky than good.”

He sold his catch to MEF which owns Blu, Little Venice, L’Orientel and Harbourfront where the fish has now been distributed.

“They are a good customer of mine and have been loyal to me for the past 20-something years and I have a good relationship with them,” Mr Soares said. “I’m going to Blu Restaurant tonight to try it for the first time.”

While The Royal Gazette was the first media organisation to contact Mr Soares about his latest catch, he is no stranger to publicity having been interviewed about his last record catch in Bermuda in National Fisherman Magazine in the US.

Get your bluefin tuna replica at The Fish Mount Store.

-As reported in The Royal Gazette, Bermuda.