Mystery surrounding neon-green pike appears to have been solved

Two anglers were left stunned after hooking a NEON pike. Randy Straker, 51, and Craig Thomas, 54, from Yellow Knife in Canada were about to bring their five-hour fishing trip to an end in the Great Slave Lake last Sunday when they grabbed the colourful catch. The fluorescent 40-inch, 14-pound green fish has a bright 'lipstick-like' mouth and a similar tinge to the rest of its fins. 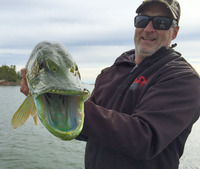 Somewhere in northern Canada’s Great Slave Lake is a fluorescent-green pike that looks as though it’s wearing neon-green lipstick.

The bizarre-looking fish was released after being caught by Yellowknife angler Randy Straker, during a recent outing with Craig Thomas.

Northern pike, also referred to as jackfish, are typically much darker, with a brownish or olive-green complexion, and with yellowish-white bellies.

The 12- to 14-pound pike reeled in by Straker, an avid Great Slave Lake angler, “was totally, head to tail, like nothing we’d ever seen before.” 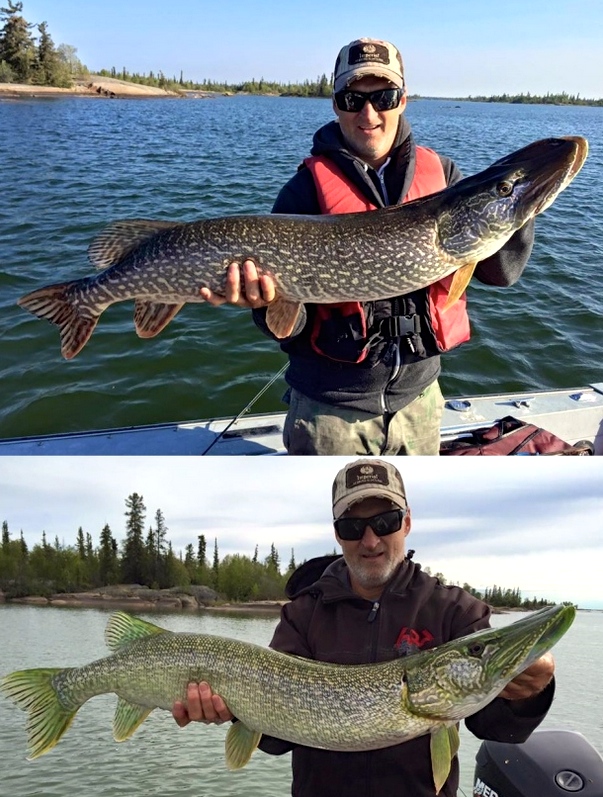 He explained to CBC: “The whole top of the fish had a different green. If you look at the mouth, it looked like green lipstick, it was so bright.”

The anglers set the pike free after taking a few quick photographs, realizing afterward that they should have taken more photos as a means of documenting their odd catch.

“When you put it up against another pike, it’s way lighter,” Straker said. “The fins were kind of a translucent green as opposed to the darker colors of a regular pike.”

On social media, many offered theories, ranging from the fish’s diet, to pollution, and even radiation from the Fukushima nuclear disaster.

However, Jeff Goudreau, a Fish and Wildlife technician and Great Slave Lake guide, appears to have solved the mystery. 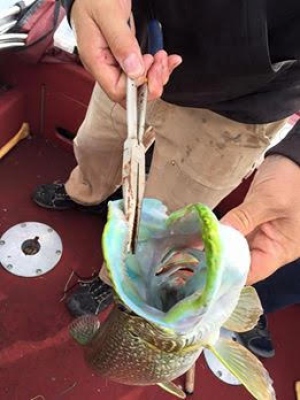 Goudreau, who claims to have caught a few pike with similar coloration, said it has to do with cells called chromatophores, which enable fish to change colors when they’re frightened, or become excited while hunting, or to blend in with specific habitats.

The unique coloration of this particular pike, Goudreau told CBC, probably stemmed from its habitat in shallower, algae-rich water of the narrow arm in which Straker and Thomas were fishing.

“They try to blend themselves into that environment to be better hunters,” Goudreau said. “So you’ll see those aquamarine colors, where the throats are very blue and dark green and stuff. That’s pretty much what happened with this one.”

This explanation was echoed by Neville Fickling, a pike expert from England, who said the predatory fish are “always going to be able to determine exactly what their environment is, and adapt chromatophores accordingly.”

Straker and Thomas were exploring a new area in the vast Northern Territories lake, perhaps explaining why they had never seen a pike so uniquely green.

“I was wearing polarized lenses, and I thought maybe that was causing some different coloration in the fish,” Straker said. “I was just about to pull my glasses off to take another look… and then my buddy made a comment about how strange the fish looked.”

The two planned to fish the same area again, to see if they could land another just like it.

We can make your pike just as funky as this real one in Canada.